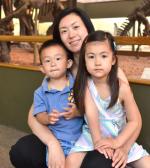 Shirley is mom to Carina, 4, and Darren, 2, and a manager of financial reporting and analysis for finance and business operations at Yale.

Shirley Chock is being recognized as co-chair of the Asian Network at Yale (AN@Y), an employee resource group aimed at creating networking and career-advancement opportunities while strengthening the climate and culture at Yale for all Asian staff members.

Believing that some Asian cultural norms can be inhibitors to professional growth, Shirley encourages Asian staff members to lend a stronger voice to career advancement and has developed avenues to help enhance their communications skills. With Shirley’s involvement marketability workshops provided a welcoming environment for Asian women to explore body language, improvise in real life and understand proverbs across cultures.

Creating engagement beyond the walls of Yale University, Shirley forged a partnership with the National Association of Asian-American Professionals (NAAAP). Co-sponsoring speaker series and social events with NAAAP, AN@Y increased networking opportunities for both groups.

As Yale University’s representative working mother of the year, Shirley Chock has helped change Yale culture for the better. Shirley lives in Hamden, Connecticut, with her husband, Marcus, and their two children, Carina and Darren.