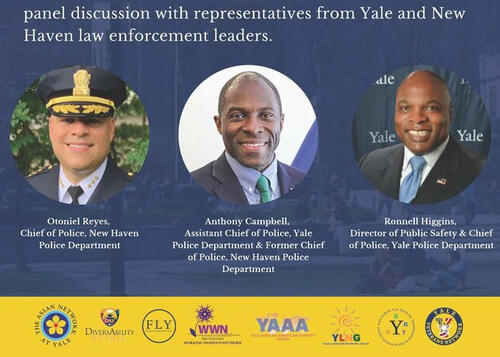 The chief officers answered each question straightforwardly, including those that were complex, and did not shy away from difficult or sensitive topics such as race and gender.

Topics discussed included continual officer training, teachings about being proactive rather than reactive, being aware of officer biases, human initiative training such as looking at each person equally as a human being and how to be in tune with the needs of the community(ies). Policing is a constantly evolving field that needs accountability partners, solicited feedback from vulnerable populations such as BIPOC, women, LGBTQ, veterans, and those with disabilities. The discussion also talked about local issues affecting New Haven right now, and how to pool resources and efforts to address community challenges such as food insecurity during a pandemic.

Although we ran short of time to address questions from the audience, Chief Campbell concluded that this is just a beginning. Asian Network at Yale (ANY) members are proud to find solidarity and shared ground with other Yale affinity groups and community leaders. The chiefs officers all committed to coming back to the table for more discussions like this in the future.