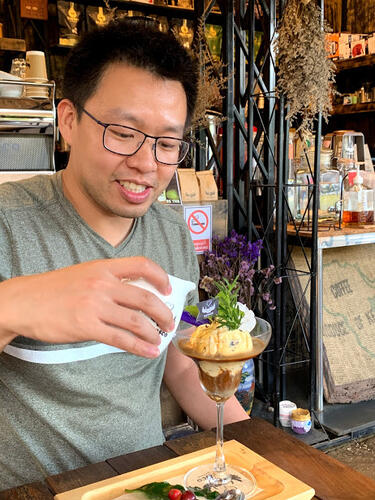 Devin is the Assistant Director at Yale Center Beijing (YCB)

“I think that food is often the first step towards understanding, accepting, and eventually appreciating and valuing another culture. So ya, go share a meal with someone and do the hard work of actually building positive connections with people in the community. It’s hard to be negative when you’re eating something delicious.”

What is your role at Yale? What do you like best about your work?

I’m the assistant director at Yale Center Beijing. Under normal circumstances (i.e. pre-covid), we host over a hundred events a year at Yale Center Beijing, highlighting some of the best, most exciting work at Yale with the goal of increasing discussion amongst experts from Yale, the US, China, and the rest of the world. I’d say the most exciting part of my work is being able to interact with so many amazing people at Yale and in China on a regular basis. Hopefully I am able to absorb some of their brilliance through osmosis!

Could you talk about your journey from studying history and East Asian studies to your current position as Assistant Director at a global intellectual hub – Yale Center Beijing?

There’s a pretty common joke that most people don’t actually use their undergrad degree from a liberal arts education, and to be honest, I never imagined I’d be doing a job with a direct connection to what I studied either! But it’s been a huge blessing to be able to continue working in a job related to China and to keep building upon what I learned at Yale. It was definitely a little strange when I first started because so many of the professors I learned from and admired as a student were suddenly my colleagues, but it’s a pleasure to be able to still interact with them regularly. And I guess another thing that has proven helpful is that with a liberal arts education, we dabble in lots of subjects as a student. Not much has changed! I still don’t know much about anything, but I’d like to think I know enough to at least engage in asking the experts the right questions.

What has surprised or intrigued you most about Yale’s long standing history with China?

The history between Yale and China is just amazing. When I first got to Yale, I had no real intellectual interest in China, and I didn’t know I had any interest in history either. But things happen for a reason I guess, and I just took a Chinese history course on a whim and fell in love. Here I was studying modern Chinese history “just because,” but again and again I’d see Yale keep popping up. So many “firsts” happened here at Yale, from the first Chinese student to graduate from a US university to the first western-style hospital in China being founded by a Yale grad to many of the first presidents of top Chinese universities being Yale grads. It’s just incredible to know there’s such a long line of history between Yale and China that’s still going strong today.

What are your thoughts, concerns, and encouragement regarding Asians/Asian-Americans pursuing and excelling in leadership roles? Who or what has helped you most in your career so far?

I think the research is pretty clear now that there are definitely implicit biases and systemic frameworks in place that hinder Asians and Asian-Americans from excelling in the workplace, especially when it comes to leadership roles. I personally think it’s helpful to acknowledge there are certain things you can control and certain things that are out of your control, and being able to distinguish between those things will help in knowing where to invest your energies and when to not get overly stressed about things. I’m naturally a pessimist, so I’ll say I’m cautiously hopeful that as more and more conversations are happening about systemic racism and implicit bias, there will be a new awareness around these issues.

Regarding diversity and inclusion at Yale, what have you experienced here and in Beijing, that is truly effective and would like to see more of?

Honestly, at Yale, and overall, the system and environment is and will remain for some time quite white. I think the only way to truly create a more diverse and inclusive environment will be for more and more Asian Americans and other BIPOC (Black, Indigenous, and People of Color) to become leaders. Only once we have more diversity in leadership positions will others begin to see it is possible to become leaders and then be inspired to take on leadership roles to enact change. And I’m not talking about token diversity leadership positions and committees. As important and necessary as they are, those are just bandaids that don’t actually get to the core of the issue. Even with the few BIPOC people we have in leadership positions, they’re still limited to serving within a culturally white structure/system. The system itself needs to change, and that can only happen when we have a meaningful critical mass of diverse leaders.

Food is a big part of life. What is your perspective on how Asian food culture affects American society and influences positive change in our communities?

Here’s my basic premise: It’s hard to sit down for a meal with someone you hate, so I think food is a good entry point for learning about and appreciating other cultures. Who doesn’t like a delicious meal!? Unfortunately, that also means food can be used as a tool for racism and political oppression. Historically, Asian food in America has been seen as “gross,” “disgusting,” “yucky,” and “foreign.” It’s been a large part of perpetuating the otherness/foreignness of Asian Americans. I think many Asian Americans have had that “school lunch” experience where they were ashamed to eat their own food when most other kids brought pb&j or ham and cheese sandwiches. But I think with foodie culture, at least in the more urban parts of the country, different Asian cuisines are finally not only being accepted, they are sometimes even considered cool or trendy. Think of the shift in how sushi has been perceived, from raw fish being seen as a “gross” food to now being one of the most expensive meals you can have anywhere in the US. Korean food, especially kimchi and other fermented products, has become trendy. Chinese food, at least pre-covid, was finally being recognized for its diversity as more and more restaurants were specializing in specific regional cuisines. This presents its own problems as it goes back to another common problem seen in the Asian American experience, namely exoticization and objectification. It becomes a point of pride to say you’ve eaten some lesser known food at some hard to get into restaurant, as if certain Asian foods were just an object to check off your list. But on a more positive note, I think if people enjoy a certain food and truly are curious and want to learn more about another cuisine, I would hope that naturally leads to understanding, valuing, and appreciating not just that food, but the culture that food comes from and the people that it represents. Though with coronavirus, we again saw how food was employed as a way to perpetuate old racial stereotypes about Chinese food being unclean, dirty, low-grade food, and by extension, it somehow became ok to denigrate Chinese and Chinese Americans. And of course, since people still lump all Asian cultures together, Thai, Vietnamese, Korean, and other Asian restaurants suffered along with Chinese restaurants from these old tropes, and Asian Americans overall suffered much more racially charged attacks. It just goes to show that while food is a great way to build connections, it can just as easily be employed negatively. Not only do Asian cuisines have to battle against such stereotypes, Americans for the most part still insist on Asian restaurants being cheap when they often involve even more ingredients and skill to prepare than typical “American” restaurants. But I think at least pre-covid, that was slowly changing. More and more, it wasn’t just Japanese cuisine that was able to charge high prices for high end meals. Korean, Chinese, Thai, and Indian restaurants in the US were receiving Michelin stars and other accolades. There are lots of issues with such food rating systems, but at the very least I think they indicate a positive direction in the standing of Asian food culture in America.

With food, dining, and cultural experiences in mind – what do you recommend to someone new to Yale and the City of New Haven?

If you can afford it, an omakase meal at Otaru is by far the best restaurant experience in New Haven. Chef Sunny trained under Nobu and Morimoto. Though it’s not cheap, it’s an incredible value for the level of sushi you get. Omakase literally means “I leave it up to you” and you’re in great hands if you entrust your meal to chef Sunny. Every piece of sushi is purposefully chosen and carefully prepared. It’s incredible, and he always tries to surprise me with some fish or preparation I haven’t had before. Please don’t order the rolls and just get real sushi. Olea has been another longtime favorite. It can be on the pricier side (though they had great happy hour and pre-fixe deals pre-covid!), but again, for the quality of food, it’s good value. It’s contemporary Spanish food in a nice, but not stuffy environment. Most importantly, the food is super flavorful and delicious! Definitely my go-to recommendation for people looking for a nice evening out. And of course, you can’t talk about New Haven food and culture without talking about the pizza, or apizza as the locals call it. Look at any list of the top pizza places in America, and you’ll find at least 2 or 3 New Haven places at the top. I feel like the word is getting out more now since New Haven pizza has been talked about in some popular food shows, but there are “New Haven-style pizzerias” in Chicago, California, and even Japan, so we’re definitely lucky to have so many awesome pizza places in town. Every place has their own staunch supporters, but I say why not try as many of them as you can? I always like to start with the OGs like Pepe’s, Sally’s, Zuppardi’s, and Modern. BAR is either an OG or a “new” place depending on who you ask. And don’t sleep on Da Legna, One 6 Three, or Next Door either! You really can’t go wrong!