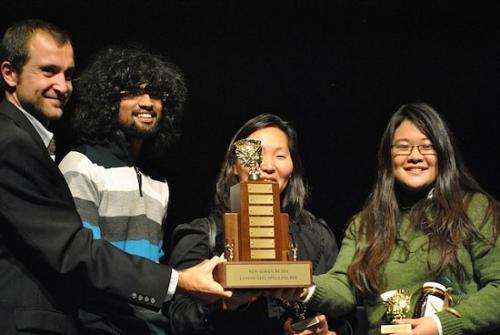 It came down to six swarms of spellers. An obscure word for ant specialist couldn’t shake them. Nor could a little-known term for Christmas cookies.

But Indian riding pants? That was another story.

It was a spelling bee with a twist. Adults were the contestants. Kids were the beneficiaries: The adults competed so kids could sit down with gently-used books.

The bee, in University of New Haven’s Dobbs Theater, was a fundraiser for New Haven Reads, the Dixwell-based not-for-profit that collects books for kids and helps kids learn to read. The event raised upwards of $10,000.

Over 230 people filled the hall for the event. Forty-three swarms—err, teams—of adults and college students competed in the bee. Many came in costume, in the spirit of Halloween; and they sported names like Bee-Guillers, Spell-Chicks and even TooBEEdetermined.

“Our first word is frolicsome. Frolicsome: full of gaiety and mirth; playful. ‘Each year, the Kentucky Derby attracts horse lovers who enjoy the frolicsome festivities associated with the race.’ Frolicsome.”

A low hum swept the room. Bee team members whispered to each other, seeking to arrive at the correct spelling and jot it down.

Matt Scott, one of three celebrity emcees, eyed the stage.

“I see a couple of guys with a good buzz, shrugging their shoulders —meaning very well this could be a short round. The Jive Hive seems to be confident—“

The squeak of a rubber duck sounded, meaning the 20 seconds off allotted time had ended.

“I see a ‘k’, an errant ‘k’ all the way in the back,” announced Scott, a former News 8 weatherman who now works for Stamford’s News 12.

“You see a ‘k’? “, asked fellow emcee Ann Nyberg of News 8, raising off her high heels a bit to see.

“A c-k, all the way in the back,” saids Scott, nodding his head.

Nyberg eyed the board with the error. “Oh, I’m sorry. … But their hats are really cute!”

And so the banter and the spelling proceeded through six rounds.

Andrewsen was ‘checked’ on the pronunciation of several words as the bee moved toward the end. Sanguinolent (tainted with blood), for instance. The person who was ‘checking’, it turned out, is a pediatric mental health nurse practitioner and official pronouncer with a statewide student spelling bee.

It came down to six teams in the end: Bee-Guillers, Team Angelo, SpellChicks, AN@Y2, Orthographers and the AppleBees, who competed to have their names on the big trophy and the chance to take home a mini-trophy and a huge jar of honey home. Schnitzel, genuflect, sciatica … cnemial finally put out three teams. Three teams remained.

Then came another mispronunciation, according to the crowd. Scott went into the audience to render the correct pronunciation for ‘myrmecologist’, which means a specialist in the scientific study of ants. The remaining contestants all spelled it correctly.

He next pronounced “LEF-cookin. — Another correction: It’s “LAYB-cooken.— It’s a word for Christmas cookie. Spelled ”lebkuchen”. Once again, all three teams got it right.

Jodhpur proved the game-ender. Only AN@Y2—better known as the Asian Network at Yale— spelled it correctly, winning and collecting their trophies and jars of honey.

Team members Tracy Polland, Heatherly Carlson and Siddharth Parhboo hadn’t met before Friday night; they had been keeping in touch through text and email.

“Well, maybe not four more years. But we’ll be back next year.”